If the Alpine Workshop in Ljubljana in September wast, as I suspect, the last international geological meeting I will ever attend, it was not a bad one to finish with. I learned a lot about the Alps and especially about the part of the world where I now spend much of my time, the extreme northern end of the Adriatic, the site of the geological junction between the Alps, the Dinarides and, not too far away, the Appenines. Now, however, I have to write the paper, which will attempt to draw parallels between the complex but almost completed collision that formed the Alpine orogeny and the equally complex but barely started Australia-South-east Asia collision, and one thing I learned in Ljubljana was that, despite more than two hundred years of geological investigations, there are still huge unanswered questions regarding the Alps. It was clear that in order to write my own paper, and despite having no hope of providing any answers, I had to get to a clearer understanding of what those questions are.  Given my geographical bias, one question in particular dominates my thoughst.

I soon discovered that in Zagreb there were geodesists who were on the case and that, in a presentation at the 2016 Wegener conference, they had provided me with a very useful picture of three possible scenarios.

Looking, however, not just at the pictures but at the captions, I realised that there was a problem, which was present in its most acute form under the first of the three illustrations. There is no way, surely, that the pale green shading can be defining a plate.  And if, somehow, it does, then what sort of boundaries does it have?  Are they accretionary, destructive, or transform? Or, since accretion seems very, very unlikely, a combination of the last two? That last option seemed just about possible, but even in the islands of Southeast Asia there is nothing to compare with the complexity required. To me it seemed that there was confusion here between the concept of a plate and the concept of a crustal block, and to learn more about that I had to look elsewhere. My search for enlightenment soon brought me to the International Journal of Earth Science and the 2015 paper by Mark Handy and his co-workers titled ‘Reconstructing the Alps–Carpathians–Dinarides as a key to understanding switches in subduction polarity, slab gaps and surface motion’. These were things that Indonesia, the Philippines and New Guinea had in abundance; it was almost like coming home. The paper included illustrations showing the hypothesised evolution of a much larger block that I could believe in as a plate, comprising both oceanic and continental (?) crust, with reasonable boundaries. However, the authors still presented me with a a problem, because in  the accompanying text they referred to  ‘the boundaries of the Adriatic Plate (here termed Adria)’.

I don’t like that at all. If it is a plate, it is as well to keep that word in its name, to remind readers what it is they are looking at. In their Figure 5 (reproduced here as Figure 2) the Adriatic Plate is shown as comprising areas of both continental and oceanic crust, and if it is to be called simply Adria we are being deprived of a useful name for the block of thickened crust, part of which now lies beneath the Adriatic, that is the focus of Figure 1.

That is what should be called Adria. 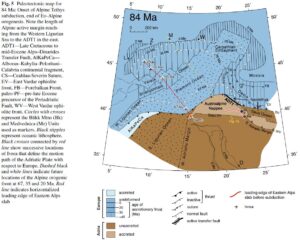 It is also obvious that Figure 2 provides a picture very different from any of the three options in Figure 1, and that the two can only be reconciled to even a small extent by reinterpreting the terminology. Not only are the eastern and western limits of what is described in the captions to Figure 1 as the Adriatic microplate not plate boundaries now, being identifiable neither by constructive (i.e. involving sea floor spreading), destructive (involving subduction) or transform (involving relative horizontal displacement) but, according to Figure 2, were they not plate boundaries at 84 Ma either. This figure shows an outline of something very similar to the Figure 1 ‘microplate’, and defines it  as the interpreted extent of today’s ‘unaccreted Adria’, within a plate (‘Adria’) that was much more extensive. This Adria Plate included a large area in the west that was underlain by oceanic crust (the ‘East Ligurian Ocean’), and along its northern margin were units (the Austroalpine nappes) representing material emplaced there during an earlier collision. Its boundaries to the east and south are undefined in the illustration, leaving open the possibility that this was indeed originally simply the leading edge of the Africa Plate.

Apart from the Austroalpine nappes, which make up only a tiny percentage of the whole, none of this plate is available for conventional geological investigation. In the northeast the overthrusting that now conceals everything to the east of the Adriatic sea beneath the Dinarides is shown as already beginning, but the gap between the thrust front and the modern Adria remnant is up to a five hundred kilometres wide. What sort of crust occupied that broad area? It seems implausible that so much continental crust could have simply disappeared, but the latest estimates of Dinarides crustal thicknesses, shown for Croatia in Figure 3, while certainly suggesting doubling of crust in some places, are a long way from providing a home for hundreds of thousands of square kilometres of continental crust. Could this flank of the Adria Plate have resembled the flank in the west, by including oceanic crust?  It seems almost a necessity to suppose that it did. 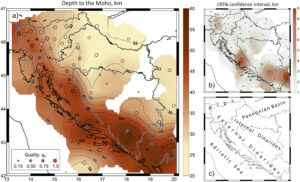 Figure 3 (Figure 5 from Stipčević, J.,  Herak, M., Molinari, I.,  Dasovićm I.,  Tkalčić, H. & Gosar, A. 2020 Crustal thickness beneath the Dinarides and surrounding areas from receiver functions);  a) Depth (in km) to the Mohorovičić discontinuity below each of the stations is shown by the colored circles according to the color scale on the right. The station symbol size is scaled by the corresponding quality of the H − κ estimate, qk. The interpolated Moho surface was spatially smoothed with a smoothing kernel of the radius of 41.5 km. (b) The 95% confidence intervals CIHφλ (in km). (c) Tectonic domains.

What Figure 3 also shows is that although crustal thickness certainly diminishes at the margins of the Adriatic Sea, there is no suggestion of oceanic crust in that area. The 40 km thickness contour estimated by the Croatian geophysicists roughly coincides with the eastern margin of the ‘Adriatic microplate’ shown in Figure 1, and although the thinning continues westwards, reaching a minimum of just under 30 km at the Italian coast according to  Italian geophysicists   it then increases to a maximum of almost 50 km under the central Appenines.

It thus seems that there is little doubt that, although it is nowhere accessible to direct geological investigation, the remnant of the Adriatic Plate that is defined by multiple authors under a variety of names as underlying most of the Adriatic Sea, is of continental thickness. The composition of the remainder of the plate of which it once formed part is a matter for conjecture, but large parts of it, to the east as well as to the west, were probably oceanic.