Historically, women have always had a hard time breaking into science, and before the 20th Century they had to be really extraordinary people to do so. Even when they made major contributions, these were usually not acknowledged or, even worse, were attributed instead to a man. The first woman to be recognised as an astronomer in her own right was Caroline Herschel, and even she had to struggle. The widely reproduced lithograph of her and her brother William ‘at work’ shows him bent over a desk, polishing the mirror of a reflecting telescope, while Caroline brings him a cup of tea. 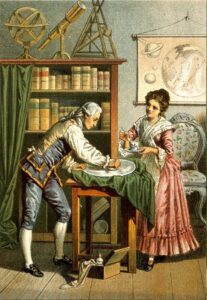 At home with the Herschels

Caroline, although self-effacing, was much more than a tea-bringer, but she might have expected that to be her role in life. It is said that when, in 1722, at the age of 22 and still unmarried, she left home to join her brother William in Bath, her mother was distraught at the loss of a daughter who had been, effectively, a servant. Once in Bath, where William was employed as an organist, she began to work professionally as a singer, but brother and sister both gave all their spare time to studying astronomy. In 1786 they moved to their new home, Observatory House in Slough, and it was there that Caroline first discovered a comet, the first of eight.

The idyllic scientific partnership lasted for two years, but then William married and there was a falling-out between wife and sister. That, eventually, was repaired, but Caroline almost disappeared from science until William died twenty five years later. In the twenty-six years left to her to come out from under his shadow (she was 97 years old when she died), she was elected to honorary memberships of both the Royal Astronomical Society and the Royal Irish Academy. But not, of course, to the Royal Society, that august institution that Henry Cavendish had found so congenial because there was no chance of him meeting a woman there.

About the Herschels there is much more to tell but not here. Interestingly, however, they were not the first astronomical conjunctions of a brother and sister .

In 1556 or possibly 1559 (the births of daughters were recorded only haphazardly by the nobility of Denmark), Sophie Ottesdatter Brahe was born, the youngest sister of the astronomically obsessed Tycho Brahe. Upset as the family might have been when Tycho showed his preference for star-gazing, rather than the more conventional aristocratic pursuits, they were even more shocked when, from the age of fourteen, Sophie began to take on the roles of his assistant and apprentice. The degree of her involvement is impossible to estimate, and Victor Thoren makes little mention of her in his 500-page life of Tycho, but other sources suggest it was considerable. It must have been a great relief to the family when, in 1579, Sophie married a prominent  nobleman, Otte Andersen Thott, the owner of a castle in Skåne, and duly produced a son and heir a year later. But Otte died just nine years later, leaving Sophie to satisfy her passion for botany, including medicinal botany, alchemy and astrology/astronomy. This was a period when no distinction was made between these two latter subjects, but not even Tycho considered them suitable subjects for women. He wrote:

“However, she, being possessed of an unyielding intention and so much self-confidence that she steps aside for no man in spiritual matters, instead threw herself ever more enthusiastically into her studies and rapidly taught herself the basics of astrology, partly through the Latin authors which she paid to have translated into Danish, and partly through German authors on the subject”.

It is hard to tell from this whether he approved or disapproved, but he did bow to the inevitable, and the widow became a frequent visitor and guest at his observatory, the Uranienborg, on the island of Hven in the Øresund. 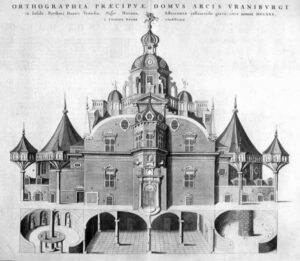 The Uranienborg. When Tycho found that winds shook the extravagant (and possibly somewhat jerry-built) structure  so much that his observations were affected, he built an entire and lavish second observatory, the Stjerneborg, that was almost completely below ground.

Sophie, then, was very far from being a self-effacing helpmate like Charlotte Herschel, but the womenfolk of the Nordic lands have never been noted for their submissiveness. She went her own way, in her personal affairs as much as in science, and whether that was her undoing is a matter of opinion. it certainly gave her a much more colourful life than she might otherwise have had, because she fell in love with Erik Lange.

Lange, another Danish aristocrat and a longstanding friend of Tycho’s, dabbled not only in astronomy/astrology but also in chemistry/alchemy, so he had that much in common with his future wife. In 1584 Tycho wrote him an extraordinary letter. It was not about any of these subjects, but, spread over three pages, it was entirely about love.  It began:

Dear Erik!   Your good friend Tycho sends you this advice “live well” – if that is possible in the violence of love. Those who love are weak in both body and soul, so weakening is love in its effects. They are never themselves; they live in another body,  enmeshed in the love of the agonies of love. Love denies them the sweetness of sleep and secure repose and wakes them restless all night.

And, after rambling on in similar fashion for another two pages, it concluded

EPILOGUE    If you now do not want this true love, then follow the irrational one: From the love of irrational love will arise the true one!

One can only guess at what that was all about, but there are two salient facts. One is that the letter was addressed to Lange at Eriksholm, which is where Otte Thott had his estates, and the second is that Thott was still alive. Whether or not there was anything between Sophie and Lange at that time, it is undeniable that in 1590, with Otte dead and the couple already in their thirties, they became engaged. Before that, Lange had given yet another twist to the saga of the Brahe astronomers. In 1584 he had brought to the Uranieborg Nicolaus Reimers Baer, otherwise known as Ursus the Bear, a man whom Tycho was to spend much of his later life pursuing through the courts. 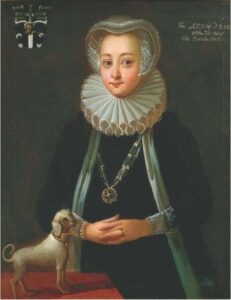 True love did not run smoothly for Sophie. In the year of their engagement Erik was arrested in Copenhagen for debt, and when released (possibly because that particular debt had been paid by Sophie) he had to flee the country to escape his creditors. She continued to send him money but it was not until 1602, a year after Tycho’s death in Prague, that they were able to marry. The ceremony took place at Eckernförde in Schleswig, and by that time Erik had spent so much of Sophie’s money that the stockings she wore on her wedding day had holes in them, and she had to borrow from friends to redeem his best clothes from the pawnbroker. They enjoyed just ten to fifteen years of married life before he died, but may have seen little of each other, because Erik was perpetually being pursued by his creditors. Philosophically, Sophie wrote that she filled her time “writing, studying, and distilling”.

The distillation may have in the interests of alchemy rather than alcoholic solace, but by this time she had a new interest. After Erik’s death she returned to Denmark and devoted much of her time to writing a 900-page long manuscript of historical chronicles, anecdotes, information about heraldic shields and analysis of the family connections between the Danish noble families. It is now held by the library of the University of Lund, in Skåne. When she eventually died in Elsinore, in 1643, she was well into her eighties.

Few in number they may have been, but female astronomers were a long-lived breed.