A bit of a rant

When I joined Australia’s Bureau of Mineral Resources, way back in 1962, when all we had to worry about was the very real possibility of nuclear annihilation, it was a slightly schizophrenic organisation. The Commonwealth government had decided that all Commonwealth public servants should  live in Canberra, and the transfer of the BMR was half completed when I arrived in Melbourne. The geologists were already in Canberra, with excellent views, from the office block we were to share with them, of the slow filling of Lake Burley Griffin, but we geophysicists were still in Victoria.  It will be great, we used to think, when we are all in the same building and can actually talk to each other.

Our move took place three years later, and I was lucky, because I did actually ‘get to talk to geologists’, but that was unusual. There was almost as little contact between the BMR’s Geologcal and Geophysical branches in Canberra as there had been when they were several hundred miles apart. The exception, which I was fortunate enough to blunder into, was amongst those who worked in Papua New Guinea. It was not an easy place to get around, and sharing transport made things a little bit more cost-effective. A system was developed whereby a helicopter went out in the morning to drop off geologists, was used by geophysicists during the day, and picked up geologists in the evening. All very cosy, but also very definitely not the norm. 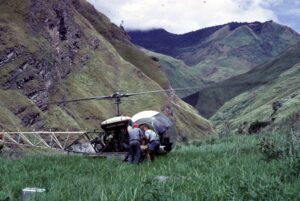 Geological – geophysical co-operation in Papua New Guinea, 1967. By the G3-B1, the pilot and the geologist, but mot th case for the LaCoste gravity meter, left foreground

Fast-forward some 15 years, and professional scientists were being required by the EU to find professional bodies to vouch for them. For Earth scientists it was deemed that the Geological Society should be that body, and that it should absorb the Institution of Geologists (where I happened to be chair of the Professional Matters committee) as part of the package. And the GeolSoc initially decreed that only a geology degree could make anyone into a proper professional. Fair enough, if they were to be the home for geologists only, but they were also going to be the home for geophysicists, and yet they were insisting that those of us with physics degrees would have to serve an extra two years before our scientific credentials could be acknowledged.

We won that fight in the end, but the fact that it had to be fought at all didn’t say very much for seamless co-operation in the Earth Sciences.

Coming right up to the present, the GeolSoc is a major publisher and is, by accident or design, covering Southeast Asia and its offshore extensions with Memoirs and Special Publications. I actually got to co-author chapters on matters geophysical in volumes on Sumatra and Thailand, and the Myanmar volume got out into the open some regional geophysics that had been pretty hard to find before. But I also reviewed Andaman-Nicobar, and geophysics barely got a mention there.

Now there is a new volume out, on New Caledonia, and the omens are not good. It will, we are told, “….. interest stratigraphers, sedimentologists, marine geologists, palaeontologists, palaeogeographers, igneous and metamorphic petrologists, geochemists, geochronologists, and specialists in tectonics, geodynamic evolution, regolith, ophiolites, and economic geology”. But not, it would seem, geophysicists.

Not being ready to pay £60 for an unseen book that might have by-passed many of the things that I would have found interesting, I downloaded the only chapter that is on open access, the Introduction. A quick search of the text for ‘geophysics’ produced five hits, which seemed hopeful – until I discovered that all five were in the reference list, and to geological papers in the New Zealand Journal of Geology and Geophysics. Then I tried searching ‘grav’. Just two hits, one a reference to gravitationally-driven emplacement of the ultramafic massifs, the other in the statement that “Systematic geophysical surveys (e.g. airborne electromagnetic, gravimetric and radiometric coverage) are seriously lacking in a country that is dependent on its mineral resources”. Which is at least an admission that geophysics might be useful, but rather suggests that nothing much has previously been done. But, systematic or not, gravity surveys have provided important insights into the structure of New Caledonia. They may not merit a chapter to themselves, and I assume that they are at least considered in some of the other chapters, but could they not at least get some sort of a mention in the introduction? 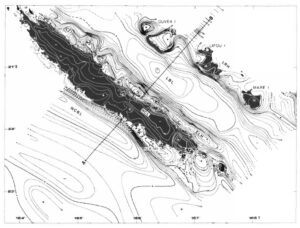 In fact, gravity surveys have already provided important insights into the structure of New Caledonia. The work began slowly, and by 1977 only the coverage off the Loyalty Islands and the extreme south-east of New Caledonia itself was ready to be reported upon. By 1987, however, J. Y. Collot and his colleagues were ready to publish a complete map, and it showed very clearly that the latter island, dominated by outcrops of high-density rocks, was actually the site of a relative gravity low, with Bouguer gravity rising steeply seawards along the north-east coast. This was a pattern dear to my own heart, because it was one that I had mapped in eastern Papua and was later to find in the Marum complex of central Papua New Guinea and on Palawan, in the Philippines. It is the recognised signature of an ophiolite thrust, where a thin sheet of mantle rock has been emplaced over continental crust from a root zone whose location is defined by a gravity high, which may reach its peak values offshore.

Nor was that the end of the gravity contribution to understanding the tectonic setting of New Caledonia, In 2012 the Geophysical Journal published a paper entitled “Rifting and subduction initiation history of the New Caledonia Trough, southwest Pacific, constrained by process-oriented gravity models”, with a different Collot amongst its authors (the others were Ron Hackney and Ruprt Sutherland), and that Collot is a major contributor to the GSL volume. So, probably geophysics does get a just and equable treatment in the body of the book. But it would be nice if the Introduction, the only part easily available to the penurious in these days when walking into a library and browsing a bookshelf seems like an impossible dream, did at least acknowledge that some geophysicists might be interested in New Caledonia, and some geophysics had actually been done there.