On the 22nd of December 1790, Don Antonio Valdés, the Minister in Madrid responsible for the Spanish Navy, wrote to Don Alejandro Malaspina, the commander of an expedition comprising the two purpose-built corvettes Descubierta and Atrevida then charting the Pacific coasts of ‘New Spain’, as follows:

“As it is being endeavoured in France to set up a new system of weights and measures derived from the length of a pendulum that oscillates at seconds at the latitude of 45º, the King has judged it appropriate to take advantage of this opportunity to promote the progress of Geography and resolved that as the course of your voyage enables you to obtain information on this interesting point, you are to do so at convenient locations, so that it may be compared with that which has been verified in that Kingdom, and that knowledge concerning the actual figure of the Earth may be perfected by determining, if the southern hemisphere is more flattened, what may be this difference and others in the exterior shape of our globe, supposing its surface not to be as symmetrical as commonly imagined. As these points must be resolved by measurements of various degrees in different regions or by the observation of the pendulum in a certain number of locations, one that has been purposely constructed with the greatest care is being sent to you with Naval Lieutenants Don José Espinosa and Don Ciriaco de Cevallos.”

It was, of course, a Frenchman, Jean Richer, who in 1673 first alerted the world of science to the fact that the period of oscillation of a pendulum varied with latitude, when he included pendulum clocks amongst the instruments he took with him for making astronomical observations in Cayenne, in French Guyana. Later, in 1735, France dispatched an expedition to measure a degree of latitude at the equator and, in the following year, to make a similar measurement in Lapland. The French had dominated this branch of science, but in South America they had benefited from the participation of Spanish officers, in whose territory they were working. The two nations had a history of cooperation in this sort of thing, but Alejandro Malaspina, to whom the instructions were addressed, was not a Spaniard at all, having been born near Parma, in northern Italy. 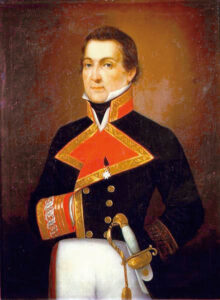 Alejandro Malaspina. Portrait by an unknown artist, now in the Museo Naval in Madrid.

It was not, however, unusual for northern Italians of the time to leave their politically chaotic homelands and follow careers elsewhere, and in 1774 the twenty-year old Malaspina enlisted in the Spanish Navy. His abilities were quickly recognised and he was rapidly promoted. The expedition he was commanding when the minister’s letter was written was modelled on those of the Englishman, James Cook, but was focussed on the territories possessed by, or at least claimed by, Spain. Access to the Pacific for Spanish ships was almost inevitably via South America and Cape Horn, and he had sailed from Cadiz on that route on the 30th of July 1789. By April 1791 he was in Acapulco, and it was there that he was joined by the two officers mentioned in the letter, who brought their pendulum with them. It was first used in Acapulco, and from there on in every place that the two vessels stayed for any length of time. These included the new British settlement of Sydney, initiated only five years before, and Port Egmont in the Falklands. In all, gravity measurements were made at 17 places. It was an impressive total when compared with what was done by the French and British expeditions of the following half century, but what about the accuracy? What was achievable, and what was achieved?

“There is nothing simpler than the pendulum that we used, which consisted of a copper disc suspended by a wooden bar cut in the longitudinal direction according to the grain. At the other end of the bar was a conical piece of metal in which was enclosed a steel sheet suspending the pendulum at its upper end on a fulcrum. The whole instrument was enclosed in a box that remained shut even during the experiments; the door had a glass window opposite the disc, behind which was a graduated scale that served to measure the magnitude of the oscillations, as well as, at the beginning of the experiment, to align the pointer at the lower end of the pendulum with the zero of the scale.

The experiments were always carried out by three observers as follows: Two counted the number of vibrations of the simple pendulum during one hour, alternating from minute to minute in order to shout them out loud, while the third observed the observatory chronometer and recorded the times corresponding to the counts of the simple pendulum. In this way, we were able to have the results agree with differences of no more than half a second.” 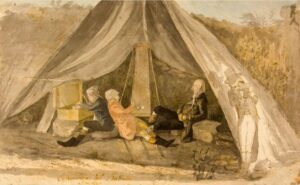 Observations of gravity at Port Egmont in the Falklands. The set-up is very much as described by Josef Tello, with the addition of Malaspina himself, looking on and looking relaxed. The pendulum is centre stage and the chronometer is being observed by the officer on the left. Hand coloured version of a lithograph in the Museo Naval,Madrid.

It is at this point the warning bells begin to ring.  If the pendulums were beating approximately once per second, then after an hour the count would amount to around 3600. Since there is no suggestion in this description of any attempt to record times to better than half a second, the accuracy could be no better than about 150 ppm, and just 1 ppm of the Earth’s gravity field is approximately one milligal. It seems that the best result that could be expected from all the Spaniards’ hard work and the long hours they spent counting, would only have an accuracy of the order of 150 milligal.

Another approach to this question is possible, because the actual results are available in Tello, Appendix III.. The lowest value, the reference value, was at the equator, and was 3607 oscillations. The largest, at Yakutat Bay in Alaska, was a little short of 3615, but there is a surprise in store. The oscillations were recorded to two places of decimals.

How was this possible? An answer is to be found in the later pages of the Appendix, where Don Gabriel de Ciscar, who held the rank of Brigadier in the Spanish navy, provided details of the processing of the original data. Corrections were made for oscillation amplitude, temperature and elevation, and all of these, when expressed in terms of oscillation, did involve quantities calculated to two places of decimals. A modern scientist would obviously be well aware of the futility of expressing corrections to precisions that were orders of magnitude greater than were inherent in the data being corrected, but the science of errors was still in its infancy at the time.

There are all sorts of uncertainties involved in converting the results presented by Ciscar to their modern equivalents, including the unknown value at the reference station, identified only as being ‘on the equator’. However, a very rough idea of what was achieved can be obtained by comparing the converted results with the modern ‘normal’ or theoretical sea level values at the latitudes concerned.

Malaspina’s gravity results. The modern estimates of ‘normal’ gravity at sea level have been subtracted from the oscillation values given by Ciscar after their conversion to milligals and are plotted against latitude. The latitude of the observatory in Port Jackson was roughly 34 degrees South.

Given that an error of just one oscillation would produce a final error of more than 500 milligal, the results are far better than might have been expected. Only at Yakutat Bay and Macao do the error magnitudes even approach that value, and if those two results are ignored the standard deviation is only about 34 milligal. It is hard to believe this could have been achieved unless fractions of oscillations were recorded. An excellent example is provided by the measurement made at Sydney (Puerto Jakson to the Spaniards), where the estimated modern equivalent value is about 979770 mGal, compared with an actual value of about 979680 mGal. The 90 mGal error is much less than it might have been, but William Dawes, working five years before Malaspina, got much closer, with 979705 mGal.

How did he do it? He followed Richer, and rather than observe pendulums, he used the effect on his pendulum clocks of the change in gravity. This might seem an inherently less accurate method, but because his observations extended over days, rather than merely intervals of one hour, he got a better result.