In 1819 Louis de Freycinet measured gravity on Guam using four pendulums, and in 1828 Fyodor Litke did the same thing, with just one. How well did they do?

In 1834 Francis Baily, president of the Royal Astronomical Society, published a memorial to Captain Henry Foster, who had drowned three years before in a river in South America. Baily’s aim was to celebrate Foster’s pendulum work by producing an internally consistent listing of all the pendulum measurements he considered reliable. Included in the list (on page 96 ) were the results obtained by de Freycinet and Litke on Guam, processed in ways that Baily believed would render them compatible with a Foster-based reference system. Having done this, and having found a significant difference between the two, Baily decided that Litke’s results were more likely to be correct than de Freycinet’s. He did not consider the possibility that the two results should have been different, because they were obtained in different places, or that the difference might have been introduced by his own processing. 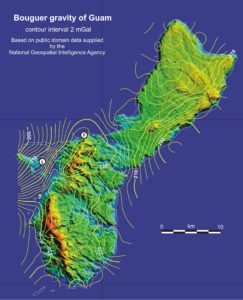 Bouguer gravity map of Guam, based on data supplied by the National Geospatial-Intelligence Agency. The horizontal gravity gradient is relatively steep where Litke set up his apparatus (location marked L), so it is not possible to be certain of the absolute gravity at that point, but the overall patterns suggest a value about 10 mGal less than de Freycinet’s (location marked F), a difference close to the limit of detectability at the time.

Baily’s problem, with these two results and many others, was that the measurements were made using relative rather than absolute pendulums, and were meaningless unless referenced to a base with a known gravity value. Foster had taken as his base the observatory in the private house of Henry Browne in Portland Place, whereas de Freycinet’s base had been in the Observatory in Paris, and, as noted above, it was the London gravity value (by definition 86,400, the number of vibrations per day of a pendulum that beat exact seconds at Mr Browne’s) that Bailey chose as his standard.  De Freycinet made no measurements in London, and Baily approached that problem in two ways. He used the link established by Edward Sabine between Portland Place and  Paris to give him a Freycinet value for London, and he also looked to see if there were any places where both de Freycinet and Foster had been, and found just one, in Cape Town.

Baily may have been an excellent mathematician (too good, perhaps, for some of his readers), but his choice of ‘vibrations per day of a seconds pendulum’ (hereafter ‘VPD’) as a way of presenting the results, while not unusual at the time, does make life more difficult for a modern reader. VPDs, being inversely proportional to periods, are proportional to the squares of the gravity fields. The widely used alternative, the length of the seconds pendulum, has the advantage of being directly proportional to the gravity field, but he decided not to use that. His calculations involved several approximations but, because the range of possible values of the gravity field is small compared to its absolute value (and also because pendulum accuracies were no better than ±10 mGal at best), these did not introduce any significant errors . A change of one VPD equates to a change of 22 mGal, to the nearest milligal, almost anywhere on the globe.

Baily’s discussion of the various corrections that had to be made was exhaustive, and exhausting, but he had in many cases to apply them to pendulums that no longer existed or were unavailable. On p41 of the ‘Observations de pendule’, Louis de Freycinet gave his Paris reference value as 86,400 VPD (i.e. the seconds-pendulum value at Paris) and his value at Guam as 86,295.013 VPD, and Baily corrected these for the difference between the standard temperatures used (20°C in Paris and 62°F in London) and decided that the appropriate values for comparison would have been Paris = 86,406.00 VPD and Guam = 86,300.86 VPD. He then took into account the difference of 11.63 vibrations measured by Edward Sabine between London and Paris, and subtracted that from the Foster standard 86400 VPD in London to give a Foster value in Paris of 86,388.37 VPD. Bailey also assumed that after he had made his corrections there should be a constant ratio between Foster’s values and de Freycinet’s values, and to find that ratio he divided ‘Foster’ by ‘Freycinet’, obtaining a factor of 0.99979563. He then used a similar  procedure for the two sets of results from Cape Town, and obtained a ratio of 0.999789808. Averaging gave him 0.9997927, a factor by which he multiplied all his corrected Freycinet values before entering them in his final listing, in which his final corrected value for Guam was 86,282.98 VPD.

Unlike de Freycinet, Litke did measure gravity in London (he borrowed the pendulum for his global expedition from the Board of Longitude), but at Greenwich rather than in Portland Place, and he converted his results to the Portland Place standard using Sabine’s estimate of the difference between the two sites. This was similar to the method used to bring the Freycinet Paris result on to the Foster standard, but for some reason Baily abandoned this method when he wanted to bring Litke’s results on to the same standard. Instead he decided to rely entirely on measurements made on St Helena, the only place visited by both Foster and Litke.

This was a very bad idea. Foster had set his apparatus up “in Lemon Valley, in a room previously occupied by the serjeant in charge of the fort”. The terrain effects would have been considerable (at the ~10 mGal level, which would have been measurable even with a pendulum) but at least the height correction would have been small, because the fort was no more than 10m above sea level. It was the common practice at the time to quote results only after a correction had been applied for the height of the reading point above sea level,. Different people had used different factors, but fortunately very few of the stations were more than a few tens of metres above sea level and, given the accuracy of the measurements, this correction could be ignored. Litke, however, ‘made a series of pendulum experiments in response to a pressing invitation and with the cooperation of Mr Johnson, director of the observatory that had been established with funding from the East India Company’.  The inclusion of Johnson’s name leaves little doubt that this would have been the Ladder Hill Observatory, completed only a few months previously, and now the site of an annual ‘fun run’ to see who can climb the 700 steps up from the beach in the shortest time. The terrain effects would have been even worse than in Lemon Valley, the uncertainty in height would almost certainly have been greater, and the differences in the factors used to make elevation corrections could definitely not be ignored. Litke himself characterised his St Helena measurement, along with his Guam measurement, as ‘the least to be depended on’.

Given the problems at St Helena, the most sensible way of finding out how well Litke actually did is to rely on Sabine’s Greenwich – Portland Place link, and use the 981,186.6 mGal value of gravity at Portland Place estimated from nearby stations in the files of the British Geological Survey. If this is done, the computed absolute gravity at Sumay, Litke’s site on Guam, is 978,507 mGal, which compares with a guesstimate of 978,522 mGal based on the nearest stations of a public-domain data set supplied by the US National Geospatial-Intelligence Agency.

An error of 15 mGal is nothing to be ashamed of with the instruments used, especially for one of the two stations ‘least to be depended on’, but de Freycinet did even better. Using his results and ignoring Baily’s corrections, the gravity field at the Palacio in Hågatña is 978,540 mGal. The nearby NGA stations suggest a value of 978,532 mGal, and the error, of only 8 mGal, is really remarkable. On the other hand,  after being corrected by Baily both the Litke and Freycinet results had errors equivalent to about 50 mGal.

Poor Baily! It is just as well he never knew that all his painstaking adjustments actually made things a lot worse!  The whole affair represented a triumph for the people who actually went out into the field and collected the data, over the people who sat at home and manipulated their results.