Ayn Rand and the floods

The water level in the River Lugg, a couple of hundred metres away, is now falling. Four days ago it was three to four metres above normal, and almost, but not quite, up to the top of the arches of the little single-track road bridge across it.

We have been lucky. Homes have been flooded in Hereford, Hay-on-Wye and Tenbury Wells, none of them more than a short drive away under normal circumstances, and some businesses have, quite literally, gone under. There have been calls on all sides for government help, both in terms of compensation for loss and investment and for better flood defences. How would Ayn Rand have responded? 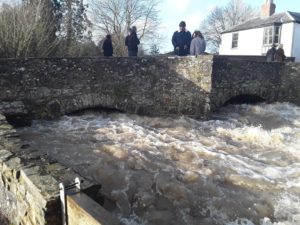 It seems safe to assume that she would not have been sympathetic. Speaking through her mouthpiece, John Galt, towards the end of his soporific rant in Atlas Shrugged (p977 in my Penguin edition), she said “The only proper functions of a government are: the police, to protect you from criminals; the army, to protect you from foreign invaders; and the courts, to protect your property and contracts from breach or fraud by others, to settle disputes by rational rules, according to objective law”.

People, it seems, need protection only from other people. There is no need for us to take collective action to protect ourselves from what the planet can throw at us. It seems a strange position to be taken by someone who spent much of her life in California, a state with a spectacular history of lethal seismicity, but her world-view had little room for the constraints imposed by the natural world. Judging from her description of the way things were run in her ideal society of Galt’s Gulch, her response to the sight of an earthquake victim half buried in debris would have been to quote them a price for her assistance. Dagny Taggart received prompt medical help after she had crashed into the Gulch, but only because she had money in the bank. Presumably the same system would apply if you lived there and your house caught fire. No need for a governmental Fire Service, still less for any government-enforced regulations.

But what if it was your neighbour’s house that caught fire first, and your own house was collateral damage? Or, in the present case, if my house were to be flooded because of actions taken by landowners further upstream. Do I have to wait for that to actually happen, and then wait for the courts to decide, following “rational rules, according to objective law”? The Rand doctrine, as expressed by Judge Narragansett (p1073), is that nothing should ever be done to abridge the freedom of production and trade. Only after the damage had been done could I take my case to the Judge’s court, and even then, following the rules he has set, he might well decide against me.

Here we are fortunate. The people who founded this town and those who, over the years, have added to it, have had the good sense not to build on the flood plain, and the Lugg would have to rise a great deal higher to affect us. But it could happen, if someone upstream decided to invoke a Rand-sanctioned freedom to produce and trade in ways that still further speeds up the runoff from the catchments. I would prefer to live in a society where my right and my neighbours’ rights to remain unflooded are seen as more important than the absolute rights of someone in the headwaters to make money in any way they choose.