During a recent visit to the Archives Nationales in Paris, Sylvie Brassard discovered a handwritten draft of the instructions issued to Louis de Freycinet before he left Toulon on the Uranie, and also some notes relating to magnetic measurements made at Shark Bay, which was known to Freycinet and his companions as the Baie des Chiens-Marins. I had intended to use these discoveries in some notes aboutt Freycinet’s use of pendulums, and the possible reasons for his failure to use them at Shark Bay, but while attempting to do so I realised the importance of understanding the sequence of events during that visit. Here, then, is a calendar, based on the Freycinet’s Historique (H), Rose de Freycinet’s letters (RL) and journal (RJ) and Gaimard’s diary (G). Of all these sources, Gaimard’s is the most useful in fixing the dates and times of events, even including some of those at which he was not personally present.

The route of the Uranie from the Mascarene Islands (Mauritius and Réunion) to Shark Bay, based on the estimates of position made at noon each day. After leaving Réunion, de Freycinet took the ship well to the south to take advantage of the strong westerlies at mid-latitudes. As a consequence, as he was approaching Australia he was equally well placed to head for King George’s Sound or Shark Bay. His decision to omit King George’s Sound may have been influenced by his expectation of difficulties in subsequently rounding the southwest corner of Australia against the prevailing winds. He had a map in his library that showed them..

11: The coast of Australia (Terre d’Edels) is sighted for the first time at half past one in the afternoon (G).

12: Inscription Point on Dirk Hartog Island and the southern tip of Dorre Island are sighted at two in the afternoon (G). The Uranie anchors in the bay itself at twenty past five (G). According to Rose de Freycinet, the anchor is let go at six in the evening (RL).

13: At nine in the morning the ‘canot du Commandant’ is despatched with Fabré in command, accompanied by Quoy, Ferrand and Taunay, with two days supplies and two barrels of distilled water, to survey the coast and retrieve the Vlamingh Plate. At eleven, under topsails only, the Uranie is taken further in, and anchors in Dampier Bay at ten past five (G).

14: At two in the afternoon the remaining boats are put in the water and at mid-day Labiche and Pellion are sent in the chaloupe to select a campsite on the Peron Peninsula. They had great difficulty in reaching land and had to wait for high tide to do so. They do not get ashore until half past eleven at night (G). Labiche was accompanied by Gaudichaud, who was responsible for setting up the alembic disembark  (H).Louis was concerned because the Dirk Hartog expedition had not returned, having had food for two days only (RJ).

15: At six-thirty in the morning Duperrey and Dubaut were despatched in the grand canot to collect turtles from Faure Island and map the eastern part of Shark Bay.  Some men (and one woman) of the Malanga tribe appear (G). The shore party begins to set up camp at daybreak. Labiche returns to the Uranie, leaving Pellion in charge. At about mid-day some of the Malanga appear and try to persuade the Frenchmen to go away, but eventually a limited amount of trading is possible.  During the exchange Jacques Arago arrives, having been put ashore some distance away at his own request, and manages to initiate some dancing by playing on the castanets he often carried (H).

16: Louis and Rose go ashore, and Louis decides to move the camp further south. The Malanga appear for the second (and last) time (G). Rose is carried ashore by two sailors, they arrive some distance from the camp, and see the Malanga on the crest of the dunes. They are soon joined by people from the camp, and walk to it. Louis immediately orders the camp to be moved, and they walk back again, lunching there on oysters (RL). The decision made by Louis to go ashore and choose a different campsite is in response to comments by Labiche on the unsuitability for making measurements of the site first chosen (H).

17: Lamarche is taken ill just before taking command of the chaloupe being prepared to search for the  Dirk Hartog expedition. The chaloupe leaves at eight, commanded by Pellion. The two boats return together at six in the evening (G). The expedition returning from Dirk Hartog had suffered from thirst, but had caught fish. Louis and Rose remain on board all day, because the camp ashore is not yet fully established (RL). 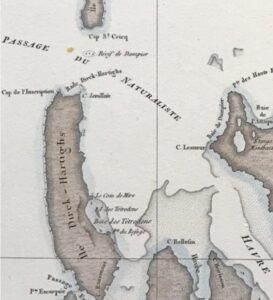 Detail from 1811 Freycinet map of Shark Bay, based on surveys made during the Baudin expedition. On the Peron Peninsula the Montbazin Inlet is shown as a lake, an error that could have caused to deaths of Gabert and Gaimard, who expected to be able to get round it to the south.

18: Gaimard goes ashore and, with Railliard, Bonnet and Gabert, heads inland on the Peron Peninsula, hoping to meet up with the Malanga. They camp overnight on a sand dune on the far side of the Montbazin inlet (G). Rose and Louis go back ashore and spend several days there under canvas (RJ).

19: Gaimard and Gabert separate from Railliard and Bonnet, who get back to the camp in the evening. They get lost and spend a second night in the dunes (G).

20: A search party is sent out to look for Gaimard and Gabert, who eventually struggle back to the camp without meeting them, arriving at about nightfall (G).The search party is headed by the midshipman Ferrand and includes Arago, the bosun Bonnet and two sailors (H).

21:  Duperrey and Dubaut return from Faure with a turtle weighing 320 livres Gaimard and Gabert go back on board the Uranie and give an account of their experiences to Louis (G). The search party headed by Ferrand and Bonnet returns at midday. Gaudichaud tries to recruit companions to make a second expedition into the interior for botany, but without success. The weight of the turtle brought back by Duperry, who had to battle unfavourable winds, is estimated at a more plausible 120 livres (H).

23: Labiche and Ferrand set off in the grand canot to fix the positions of some points along the coast (G). Gaudichaud makes a limited solo excursion into the interior of the peninsula, and finds and climbs a Malanga lookout tower.

24: Lamarche and Labiche return on board (G).

25: The observations are completed and the camp is abandoned. Gaimard and Pellion are the last to leave, at three in the afternoon (G).

26: At eleven in the morning, there being a fine breeze, the Uranie sets off for Timor. At six in the evening she runs aground on a sandbank (RJ).

27: A passage is found through the sand banks and the Uranie is safely on its way to Timor (RJ).

One of the most notable features of this sequence of events is the small amount of time Louis devoted to the observations that he had travelled almost half-way around the world to make. It seems that they were not even begun until the twenty-second and were terminated early on the twenty-fifth. There is no indication of the pendulums being brought ashore, and in any case there would hardly have been time to make even an attempt to use them.