Almost exactly two hundred years ago, on the 5th of August 1819, after almost two months at sea, Rose de Freycinet added a short note to her ongoing letter to her mother.

At last, at last, I can see land, but what land! Before us is a mountain that Louis thinks is higher than the Pic de Teneriffe. Its summit, which can be seen clearly above the clouds, is not entirely covered in snow but there are patches of snow in many places. It is a sight that inspires the imagination. We are about ten leagues east of Owihée, and I will only shout out to you ‘Land!’ and nothing more, because I have been suffering from headaches for many days and they discourage me from writing, even to you. [FL66079] 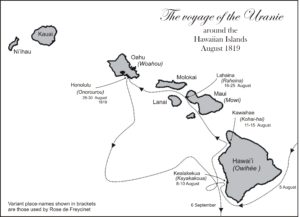 In the earlier part of this letter there was very little about the voyage from the Marianas, presumably because there had been almost nothing to write about. There had, however, been one event that was mentioned by both Rose and Louis (although, surprisingly, not by Arago).

Yesterday something terrible happened: a good seaman, who was popular because he was both skilful and helpful, was celebrating his birthday, no doubt less by praying to St Peter, his patron saint, and more by drinking generous toasts in his honour. The unfortunate man did this to such an extent that he fell through the rear hatchway in the upper deck and killed himself. If there is any good that can come from this, it is that it demonstrates to everyone the dangers of drinking too much. [FL66079]

This was one of the passages that Duplomb, an Honorary Director of the Ministry of Marine, decided to leave out of his published compilation of Rose’s journal and letters. It is easy to see why he might have found it a little embarrassing, but if he did want to hide the story he was far too late. Louis de Freycinet had published it a hundred years before.

On the 29th (of June 1819), one of our seamen, having drunk a little too much to celebrate his birthday, was killed by falling headlong from the upper deck. He was a Breton, and his name was Rio; he was a very good man, who was universally mourned; but everyone agreed that this death was better for him; he was a spendthrift, heedless of his future, and having spent all the money he had earned during his frequent voyages, was destined for a most miserable old age. [Historique Volume III: p517]

The various accounts of the voyage of the Uranie seem so modern in many ways that it is good to be reminded every so often of the realities of life as lived by most people in the early 19th century. Dying while cheerfully drunk might well have seemed to many an enviable end. The streets of the capitals of Europe were full of beggars who, as soldiers and seamen, had been maimed and disfigured in the Napoleonic wars, and they seem to have attracted little sympathy. For an able-bodied seamen, unable to find a ship or any other form of employment simply because of approaching old age, gratitude would have been in even shorter supply. Many of the crew must have been wondering if, at the end of their voyage, they would be able to find another berth in the shrunken post-war navy,  and anxiety about their future in France may have been behind the desertion of a fifth of the crew when the Uranie was anchored in Rio. It was a town where recruiters for the armies and navies of the rebellious Spanish colonies were busy with attractive offers for men with military experience (or, apparently, culinary skills – the Uranie’s cook was amongst those who disappeared).

The reasons for a second, longer, omission by Duplomb are even harder to fathom. This passage was written when the Uranie reached Oahou (which Rose wrote as Woahou) after having failed to obtain the provisions that were needed from either Hawai’i or Maui (Owihée and Mowi respectively).

…….. My evenings are spent reading American newspapers which I find interesting because, although old, they were printed after we left Europe. They were given to us by the American Captain Meek, who is now anchored here in the harbour, having come from Mowi.*

I had thought the English were the main nation engaged in bringing civilisation to the Sandwich Islands, but I have discovered that no ships of theirs have been seen for ten years: it is mainly the Americans who come. There are even members of this nation settled on some of the islands, especially on Mowi and on Woahou, close to where we are now anchored.

As he was leaving Mowi, Louis learned that there was an American vessel whose captain had rice and biscuit to sell, provisions that we will need for the next leg of our journey. You can have no idea of the difficulties that we have encountered in these islands in completing our provisioning. Everywhere Louis has been told that we would have found these things easy under the previous king, Kamehameha, who welcomed Europeans, but the authority of the young king is not yet firmly established; we have seen examples of the greed of various chiefs who, although good in themselves, are encouraged to do bad things by the vile intrigues of foreigners by whom they are influenced. Louis will write down the details of everything that will be of use to mariners who want to learn about the customs and ways of thinking in this country.

The waiting makes him very anxious because we have to have enough supplies for a long sea journey. [FL677008]

It can surely not have been diplomatic scruples that prompted Duplomb to leave this out, because he retained sections that were far ruder about the Hawaiians (and which were balanced by others that were complimentary). The picture Rose paints of herself, eagerly devouring newspapers that might have been more than a year old and were probably American-parochial and in a foreign language, is a rather touching one.

*Note: Rose wrote ‘Woahou’ but that must have been a slip of the pen because she was already there. She had previously recorded meeting Meek on Maui.