One of the most prized possessions in Western Australia’s Battye Library is the manuscript of the diary kept by Joseph-Paul Gaimard during the first half of the planned (but never to be completed) round-the-world scientific voyage of the French corvette Uranie. For Western Australians its main interest comes in the pages devoted to the ship’s two-week stay in Shark Bay in 1818, when the crew met and traded with a small group of First Nation Australians. Gaimard missed that encounter and decided to trek inland on the Peron Peninsula in the hope of seeing them there. With him went Paul-André Gabert, who was secretary to the captain, Louis de Freycinet, together with the midshipman Louis Raillard and the chief bo’sun, Bonnet. Encouraged by the fact that the sky was overcast and the day was cooler than usual, the group set off soon after mid-day.

They were armed to the teeth. Gaimard had a fusil de chasse (a shotgun?), a sword and two pocket pistols, together with powder and shot, and the others had at least a musket apiece, but they clearly had no idea of the real, as opposed to imagined, dangers they were about to face. They took very little food and water, and they were not equipped for the very cold nights. The terrain they faced was dominated by sand dunes, with salt lakes and thick bush in the valleys in between. After walking for less than two hours, and having passed two of the dry lakes, they stopped and had something to eat.

All this is described in the journal in the Battye library, but there is another source. When de Freycinet sat down to write the official account of the voyage, he drew heavily on the reports prepared for him by his staff, and he had to rely on these entirely for events he had not witnessed himself. For the Peron Peninsula excursion he included two separate accounts, one of which was a description that he attributed entirely to Gaimard  and enclosed in quotation marks. 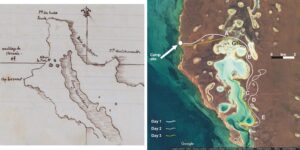 Gaimard’s walk. Left : The sketch map drawn in Gaimard’s diary. Right: An approximation of the route taken by Gaimard and Gabert between the 18th and the 20th of September 1818, superimposed on a satellite image downloaded from GoogleEarth. The position of the camp is based on recent archaeological field work, but all other tracks and locations are guesses based on information in the original sources. Point A: The first lunch stop. Point B: Possible location of the huts that were examined at about four o’clock on the first day. Point C: Possible rough location of the camp of the first night. Point D: Gaimard’s trousers may have been abandoned somewhere around here. Point E: This is the first point at which Gaimard and Gabert might have realised that the Montbazin ‘lake’ was actually an arm of the sea. Point F: The camp of the second night. Point G: The point at which Gaimard and Gabert left the shore of the ‘lake’ and headed west to the camp.

For much of the narrative, the two versions differ very little. Both describe the group’s onward trek after their lunch towards what they believed to be a large lake, their discovery of some unoccupied huts and their very frugal evening meal (a piece of biscuit and half a glass of water and wine). Towards the end of the day they considered and rejected Gaimard’s suggestion that they continue as far as the neck of land that joined the peninsula to the mainland, on the very sensible grounds that they had hardly any food or water left. Once darkness fell, they sheltered in the lee of a large sand-dune, finished their water and most of their food (leaving just a third of a biscuit and half an ounce of sugar) and lit a fire in a less than succesful attempt to keep warm.

At dawn the following morning they all agreed that they should return to the camp. Bonnet and Raillard climbed a sand dune, announced (according to Gaimard) that they should head northeast, and set off in that direction. Gaimard may have misheard, because a north-easterly path would have taken them clear across the peninsula, and the French words est and ouest can sounded very similar, especially when preceded by nord. If, however, they were somewhere near Point C on the map shown above, they might have just meant this as an initial direction, constrained by the presence of the lake. Whatever the case, the fact is that they returned to the camp without difficulty.

Gaimard intended to follow them but before doing so he decided to see the view from the dune for himself, and from its crest he thought he could see the lake where they had lunched the previous day. Having persuaded Gabert of this, the two set off together in pursuit of their companions, who were already out of sight. In trying to overtake them they first took what Gaimard thought would be a shorter path but instead got them thoroughly lost. They then decided to head north-east, but found it impossible to follow a straight line through the scrub and ended up back at the shore of what they still thought was a lake. Instead of back-tracking along it, they decided to go around it, a trek that  ended with them discovering, to their horror, that it was connected to the sea. Night was falling, and it was only then that Gabert, ‘subitement éclairé par une de ces illuminations soudaines dont parle Bossuet‘ (Brassard transcription p280), remembered having watched the sun set over Dirk Hartog Island from the camp and deduced, rather belatedly, that they needed to go west. It was too late to act on that and they bedded down for another long cold night. They were still loaded down with their weaponry and had drunk nothing all day but the blood of a seabird that Gaimard had managed to shoot. He suffered more than Gabert from the chill of the night because he had ripped his trousers to shreds while forcing his way through the scrub and had decided to take them off and leave them behind. The discard caused some consternation when they were discovered the following day by the unsuccessful rescue party. 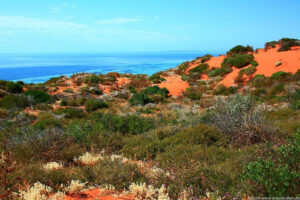 A sand dune on the Peron Peninsula. This would have been typical of much of the sandy terrain over which Gaimard and Gabert forced their way. The scrub seldom rises above knee high but can be quite thick enough to slow down progress, and to tear trousers to shreds. Photo: Sehenswürdigkeiten in Australien – Francois Peron National Park Die Anfahrt war mies, der Ausblick hier wirklich einer der besten an der Westküste. [c]©Wikipedia, 15 October 2008, Source: Francois Peron NP, Author: Rainer Körner

The next morning the now very thirsty explorers made two or three fruitless attempts to cross the inlet to the far shore but found the water too deep for wading and themselves too exhausted to swim. Only then did they decide to do what they should have done twenty-four hours earlier, which was to follow the shoreline north, often ducking in the water to keep cool, until they reached a point where they could walk west on dry land.

It is for this part of their journey that there is a significant difference between the two accounts. In his diary Gaimard was very brief. He simply recorded the fact that it was not until two o’clock that they were able to turn west, at which point Gabert had the good sense to abandon his gun, cartridge case and powder. His powder was in any case too damp to be any use since he had not followed Gaimard’s example of putting it in his hat when they attempted to cross the inlet. Completely exhausted, they arrived back at the camp as the sun was setting.

Louis, however, included some much more graphic details when quoting Gaimard:

With the hope of seeing our ship growing ever fainter, M. Gabert cried out from time to time,

“Why ever did I follow you?’ …. What a terrible idea it was of mine, to decide to follow you! …. Ah! If only the captain had refused me permission to come with you! … .;

“And if also”, I said, laughing “he had had the disgraceful idea of accompanying his refusal with a sound kicking!”

“Yes, certainly, I would have liked that; I wish to God he had done it! “… he replied seriously.

This singular echo, in the deserts of New Holland, of the “Que diable allait-il faire dans cette galère” seemed more poignant than it does in the scene by Molière**, since it belonged to a drama in which we ourselves were taking part and the outcome of which M. Gabert was contemplating with quite understandable regret. All that he wanted was to be:

“Under the roof of his ancestors; Near objects dear to his memory; Living out his days in obscurity; Without danger and without glory; Never having abandoned his country or his gods”    (de Lamartine, Nouvelles méditations poetiques)”

It was something else that worried me: the gun I was carrying was not mine but had been lent to me by one of our comrades, which imposed its own obligations: the brave Pellion, I said to myself, is going to lose his weapon because of my stupidity.

We arrived at the end of the inlet at two o’clock in the afternoon and rested there for a little while; M. Gabert, very tired and unable to carry more, abandoned, not without regret, his rifle, his cartridge pouch, and a horn of primer.

That there is a difference between the two accounts is not remarkable of itself, but the form it takes is. It would have been much more usual for the account of Gabert’s lament to be preserved in the personal journal and to have been left out of the formal report, but instead of the other way round. It is also true that one part, at least, of the report in the Historique  must be a later embellishment. Lamartine’s Nouvelles méditations were not published until 1826 and even the earlier volume, the Méditations Poétiques, did not appear until shortly before the members of the expedition returned to France in 1820. That Gaimard really did, under such stressful circumstances, find himself recalling a passage from Molière must therefore also be in doubt, but It would be a shame to think that the remainder of this short extract is pure invention. Perhaps it was Gabert who included it, when he was transcribing Gaimard’s report for de Freycinet.

** “What the devil was he doing in this mess”. There is an interesting story attached to this quotation. It first appeared in print in the Pédant Joué, a comedy by Cyrano de Bergerac (who was a real person and not just a character in the play by Edmund Rostand), but Molière claimed that it had been stolen from him, along with the whole scene that contained it, and later used it repeatedly in “Les Fourberies de Scapin”. In 2012 it was chosen by Sylvie Dodeller as the title for her Molière biography.

Had this escapade taken place today (and incautious hikers still get lost in the Australian bush, and may die there), Gabert might instead have found himself recalling the complaint voiced by Oliver Hardy to Stan Laurel in more than a dozen of the films they made together, “here’s another nice mess you’ve gotten me into.”