In 1819, between 19 and 25 May, Louis de Freycinet, with the help of some of his officers from the corvette Uranie, used pendulums to measure gravity in Port Louis, the capital of Mauritius. Frustratingly he did not, anywhere his report on the ‘Observations du Pendule’, describe the location of the ‘observatory’ where his observations were made. We know only that it was 15.5m above sea level.

Most of the ‘Observations’ volume was devoted to calculations, and here de Freycinet was meticulous. He had four different pendulums and he used them all. He stated his final result as the number of oscillations per day of a pendulum with a half-period in Paris of exactly one second and then converted this into the length of the seconds pendulum at Port Louis, as compared to the length of the Paris seconds pendulum. Expressed in more recent units, it was equivalent to a value of 978,906 mGal. This is remarkably close to the values of between 978,912 and 978,908 mGal assigned by the Bureau Gravimetrique International to described base stations in Port Louis. His estimated pendulum length was correct to better than one hundredth of a millimetre.

Isidore Duperrey had been one of de Freycinet’s officers on the Uranie. He began the voyage as an enseign, but after the death of the second lieutenant he took over his position, and fulfilled it so well that shortly after his return to France he was given his own command, the Coquille, to continue where de Freycinet left off. He took with him two of the pendulums that had been on the Uranie and went round the world in the opposite direction, making measurements on Mauritius on the way home. His description of what he did is even less precise than de Freycinet’s, and even the height above sea level has to be estimate from his calculation. The site might have been the same as that used by his former captain but his estimated latitude places him roughly two kilometres further north. This is not enough to account for his quoted pendulum length being equivalent to only 978,895 mGal, which is 11 mGal less than de Freycinet’s and further still from the currently accepted value for the Port Louis base station. Since he used only one of the two pendulums, and made measurements on just three days, it is scarcely surprising  that his accuracy was lower. It was still impressive, given the instrumentation at his disposal. 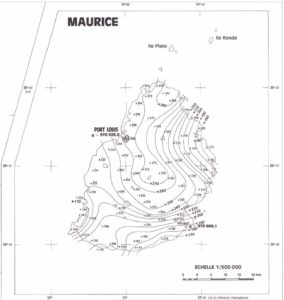 The remarkably accurate result obtained by de Freycinet gives extra force to a criticism that can be made of his work, which is that he did not make measurements in nearly enough places. In 1974, almost exactly 150 years after Duperrey visited Port Louis, gravity measurements were made on  Mauritius using a Worden Master gravity meter, and absolute values were calculated by reference to bases established in 1951-52 by J. Martin of the Office de la recherche scientifique et technique outre-mer (ORSTOM).  Bouguer gravity was calculated using a density of 2.9 Mg.m-3, which is unusually high for this purpose but would have a minimal effect on the value of +268 mGal assigned to the base station in Port Louis, or on the values as low as +170 mGal calculated for several points along the coast. It seems safe to assume that values of more than +280 mGal would be obtained at some coastal sites in the extreme north of the island, although the stations that support this conclusion are located some distance inland. Absolute gravity values on this not very large island thus have a range of more than 100 mGal, and de Freycinet could certainly have detected that, had he tried. He was on the island for more than two months, and although the road system at the time was not good, there would have been more than enough time for him to send Duperrey or one of his other outstandingly competent officers by boat to Grande Port, where he would have found a measurable difference from the readings in Port Louis.

His failure to make pendulum measurements at more than one place on Mauritius was just one of the omissions that prevented de Freycinet from making any real advances in the study of the Earth’s gravity field. There is, however, an irony in the fact that, had he been a little more diligent, he might have come to, and led other people to, some very wrong conclusions. That could have happened because after leaving Mauritius he sailed to the nearby island of Réunion, 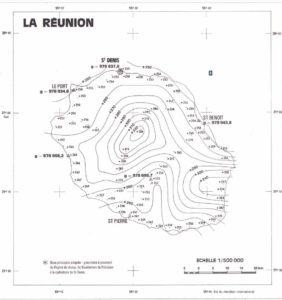 The visit to Réunion was made only so that the Uranie could be supplied from the French government store on the island, rather than having them bought expensively from the British on Mauritius. The two weeks de Freycinet stayed there would have been long enough for him to have measured gravity but he chose not to do so. Had he done this, he would almost certainly have been led to believe that the Earth’s gravity field in that part of the Indian Ocean is much more constant than it actually is. We can assume this because the ORSTOM survey that defined the gravity field on Mauritius covered Réunion also and showed that the gravity field on that island is just as variable as that on Mauritius. Bouguer gravity at its centre approaches what seems to be the global natural limit of about +340 mGal, but de Freycinet went only to Saint Denis and Saint Paul, and at those two places the gravity field, once corrected for latitude, differs from that at Port Louis by only about 10 mGal. It is unlikely that a difference that small would have been detected, or been considered significant if it had been!